Bioenergy is the most important and most versatile source of renewable energy worldwide .Bioenergy in solid, liquid and gaseous form is used to generate electricity and heat, tomanufacture biofuels and for cooking. A major benefit of bioenergy is that it can be stored .In addition to wood, biomass includes agricultural waste such as straw and manure as well as various vegetable oils and biogas .Unlike fossil fuels, biomass is emissions-neutral .When it is combusted, it only emits as much carbon dioxide as the plants from which it originates previously took out of the air .However, a climate-neutral use of biomass requires sus tainable cultivation of this resource .In traditional use of biomass, the energy content is usually used very inefficiently. As a result, the fuel requirement is very high, contributing to deforestation .The open combustion of biomass in residential buildings is connected with health problems for the people living there .

Accounting for 9 .2 per cent of global primary energy consumption, solid biomass is by far the most important source of renewable energy worldwide due to its widespread non-commercial use for cooking and heating .It accounts for 70 .2 per cent of global consumption of renewable energies .The majority of solid biomass is used in developing countries in Asia and sub-Saharan Africa .Here, biomass fuels are traditionally collected outside the commercial economy, often a very time-consuming activity, and then burned on open fires for cooking and heating in the domestic environment .Firewood, agricultural and forestry waste, manure and other unprocessed biomass fuels are also combusted to provide process heat .In domestic use in developing countries and emerging markets, improved biomass stovessave around 10 – 50 per cent of biomass consumption for the same cooking performance and can therefore contribute to an improvement in the ambient air .Political support and public subsidies, the commitment of non-governmental organisations and private sales have helped ensure that many millions of improved cookers have been installed in private households around the world over the last 25 years .Given average usage, improved biomass stoves must be replaced approximately every five years .The Federal Republic of Germany promotes modern wood-burning ovens that com bust biomass in a way that is not harmful to the environment or health and use the energy very efficiently. In sub-Saharan Africa, the German Federal Ministry for Economic Cooperation and Development (BMZ) is supporting a programme to save biomass energy (Programme for Basic Energy and Conservation, ProBEC) .In conjunction with government institutions and local small producers, simply clay and metal stoves are made locally which consume up to 90 per cent less firewood.
Modern heating systems consume biomass very efficiently .Solid biomass can also be used for electricity generation in cogeneration plants using combined heat and power .The heat generated can be used to heat stables, residential buildings, greenhouses or to dry agricultural products .

Biogas, produced by the fermentation of biomass, is used worldwide to supply energy in various ways: either directly for heat production from combustion, for conversion to electricity with or without the use of waste heat (combined heat and power, CHP), as fuel for natural gas vehicles or directly for cooking .When the gas is combusted in CHPs, the heat produced can be used to heat stables, residential buildings, greenhouses or to dry agricultural products .Biogas plants and combined heat and power plants based on biogas can also be used on a small scale for power supply to domestic households, multiple single households or for economic purposes .A biogas reactor can be operated for around 20 years until it needs to be replaced .Various anaerobic bacteria are involved in the process of fermenting the organic substance (e .g .organic domestic waste or stable manure) with air and / or oxygen excluded .A decisive factor in the productivity of biogas plants are the microbiological processes that occur during fermentation .Generation of biogas results in a fermentation residue consisting of a mixture of water, mineral components and organic substance that has not biodegraded .This fermentation residue can be used as an agricultural fertiliser .The German biogas industry has taken a pioneering role in the field of generation and utilisation of biogas. Germany is both the market and technology leader, particularly in the area of gasification based on organic waste and renewable sources .Within the framework of international cooperation, the Federal Republic of Germany is funding the implementation of small biogas plants in order to preserve natural resources and human health. From 1997 – 2011, the German KfW development bank helped the government of Nepal to build systems that produce biogas based on cow manure .The systems consist of a subterranean tank (reactor) filled with organic materials (e.g. animal and human excreta) and a pipe system which feeds the gas produced to the combustion points .The gas is used to operate cookers and lights .Just two to three cows provide enough manure to operate a small plant .The funds were provided via the Alternative Energy Promotion Center (AEPC) which coordinates the funding policy for alternative energies in Nepal .Some of the funds were used for building costs allowances, whilst the rest went into a fund to facilitate the granting of loans for constructing biogas plants .The farmers were both the customers and operators of the plants and provided 75 per cent of the funding for the plants in the form of cash, loans or their own work .The total potential for biogas in Nepal is estimated at over two million plants .As of July 2011, over 240,000 biogas plants had already been installed in Nepal as part of the funding programme .Furthermore, the KfW climate protection fund has reached agreements with the Nepalese government for the crediting period 2010 to 2017 on the purchase of carbon dioxide certificates generated by the programme .This results in additional revenue which should be used to fund biogas plants . 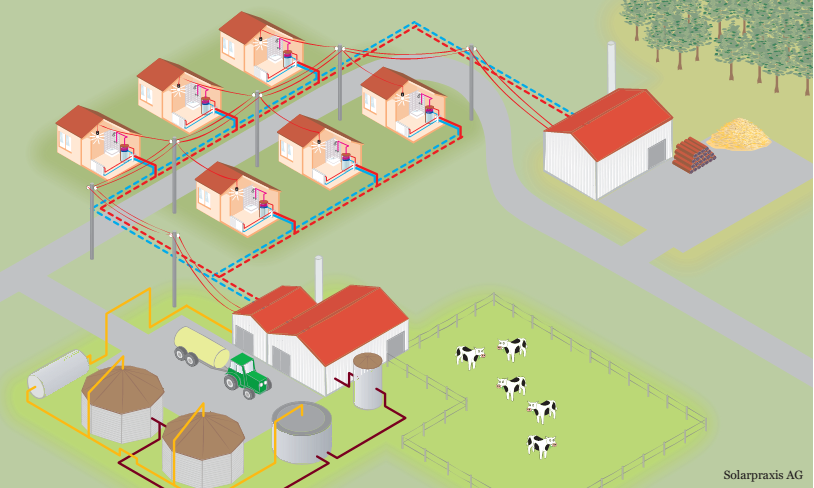 Liquid biofuels are suitable for mobility purposes and electricity generation; some of them can also be used for cooking . Bioethanolis manufactured from various agricultural feedstocks containing sugar and starch .In Europe, cereals and sugar beet are used, while sugar cane is used in Brazil and maize in the USA .As with conventional alcohol, bioethanol is produced by fermenting sugars using yeasts, followed by a purification process. Biodiesel, on the other hand, is produced from vegetable oil .In principle, any vegetable oil can be used, with rapeseed being the primary source material in Europe and soya oil in South America and the USA. Palm oil, sunflower oil and jatropha oil can also be used .Jatropha oil, for example, can be used as a substitute for fossil diesel and can be used for electricity generation .The plant thrives in areas that are unsuitable for food plants (hot, dry areas), prevents soil erosion, has a high oil content (25 – 35 per cent) and can provide fuel for a period of 30 years .After appropriate processing, used cooking oils and animal fats can also be used to produce biodiesel .However, plant oils vary in their fatty acid composition and thereby in their suitability, also in winter months in colder areas, for use in the form of biodiesel .Untreated vegetable oils can be used as a fuel in diesel engines for mobile and stationary applications (cogeneration plants) .However, due to the higher viscosity and lower cetane number of vegetable oil fuel in comparison with diesel fuels, the engines must undergo minor modifications.